dbx 166xs is a outboard equipment that including “Compressor”, “Limiter” and “Gate”.

dbx 166XS Compressor/Limiter/Gate is a outboard equipment that including Compressor, Limiter and Gate function. dbx 266XS

dbx 166xs is composition by 3 sections.

and this is high frequency in used parameters.

Possible control range of Attack time and Release time are

Possible control range of Ratio is

Possible control range of Peakstop (in Limiter part) is

This is a Gain Reduction Mater that a frame by red border.

（I dare to switching on full lamp）

If Gain Reduction gets more and more, red lamp switch on right to the left. 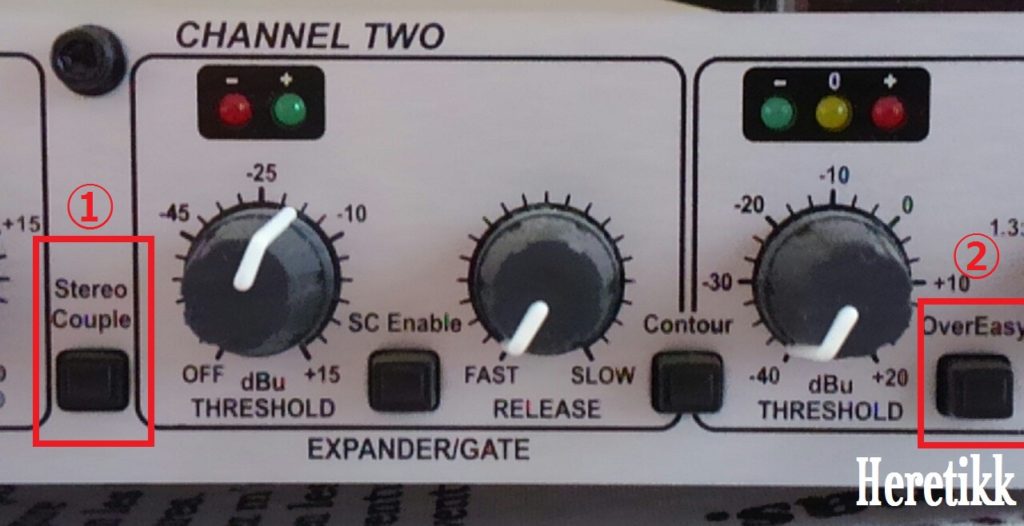 Also, useful function of dbx 166XS are like this.

(in case of push “Bypass”, “Stereo Couple” ON. Lamps switch on like a above picture.)

dbx 166XS is a stereo compressor. So, dbx 166xs is including Channel ONE and Channel TWO.

In the case of use compressor to both channel, you can control parameters independently. But, Channel ONE’s setting reflection to Channel TWO automatically if you push “Stereo Couple button” ON. In a word, this approach is better, if you get high work efficiency.

（in case of push “Over Easy” button ON）

What is more, dbx 166XS is including Over Easy button.

If you push Over Easy button “ON”, Knee*2 of Ratio*1 gets softer than in case of not push.So, if you want to naturally compression, this function may good.

*1・・・Rate of Compression. In case of Ratio is 2:1, the sounds that gets over threshold are compression to 1/2.
*2・・・Curve of near threshold point. Compression  curve is linearly in normally. But, Knee gets soft, compression curve gets roundness.

different point between the dbx166xs and 266xs

is a similar model of dbx 166XS as I was mentioned at the beginning. And different point of each other is this.

Different point between the dbx 166XS and dbx 266XS is like this. The former is including Compressor, Limiter, Gate. But, the latter is including only Compressor and Gate. Simply, there are including Limiter function or not.

dbx266xs isn’t including Limiter function. So price is lower than dbx 166XS.

If you don’t care about use Monaural Compressor, you can choose dbx160A

. dbx 160A is including Over Easy function too. So, it can control hard knee or soft knee.